Five students from Westminster Christian Academy graduated from the 2017 STARS program at UMSL. 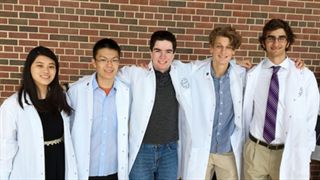 During the summer, five students from Westminster Christian Academy in Town & Country, Missouri, graduated from the 2017 Students and Teachers as Research Scientists (STARS) program at the University of Missouri-St. Louis. STARS, which is funded partially through various private industries and universities in St. Louis, introduces both high school students and teachers to the various aspects of the scientific enterprise as practiced by successful scientists in research institutions.

In a given year, usually one or two Westminster students are selected for STARS, but Andrew Shaw, chair of Westminster’s Science Department, notes that this year’s class has a lot of talented students in the area of math and science, leading to the surge in interest in the program. “Dr. Ken Marers, who runs STARS for the university, always comes to the school to promote the program,” said Shaw. “Some years we only have a handful of parents come to the presentation, but this year the room was full.” 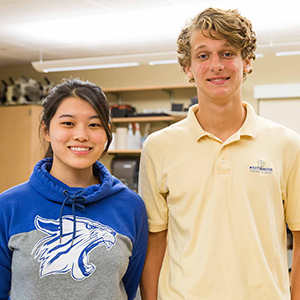 Incoming Westminster seniors Amie Lee, Daniel Wang, Preston Wills, Blake Andrews, and Markus Cicka (pictured above, left to right) were among the 96 high school junior- and senior-level students from the St. Louis metro area to complete the program. Each student was paired with a research mentor from the St. Louis area to work as student apprentices and to complete research projects. Their papers included “The use of DNA aptamers as electrochemical biosensors for pesticides,” “The effects of Ferrostatin-1 on myocardial cell death after myocardial infarction in murine models,” “Haplotype analysis for founder studies in two common recessive hypophosphatasia mutations,” “The effectiveness of iron and ruthenium catalysts in the activation of propargylic alcohol reactions,” and “Fluorescent 2, 7-disubstituted germa and silafluorenes.” Lee and Andrews both earned special honors for their papers.

In addition to laboratory work and extensive research, students also have the opportunity to present their papers to their peers and to attend lectures by nationally known scientists from the St. Louis science community.