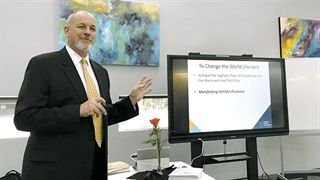 Westa began the trip in Melbourne, with a presentation on “Challenges Affecting Christian Schools Globally” for the 30 gathered members of the Victoria Christian Principals Convention. The next day he toured CREST, an association made up of two schools named Hillcrest and Rivercrest, where he spoke to the staff and faculty, toured the schools (including their equestrian center), and met with the senior leaders of the association. Said Westa, “There are excellent, leading-edge things going on here, with a hugely diverse population: 36 languages are represented in their school! Rivercrest is a new preK-12 international baccalaureate degree school still under construction, and the older, founding school (Hillcrest) provides a standard Christian school curriculum. They have waiting lists for both schools.” 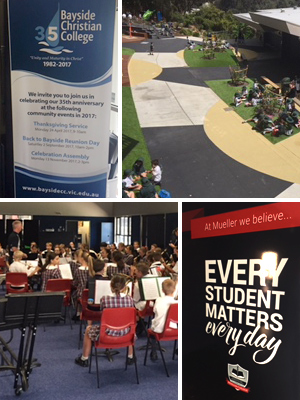 On his last day in Melbourne, Westa met with CSI’s equivalent organization Christian Education National (CEN) and visiting schools. Each school has a unique emphasis but each is equally focused on ensuring that education is completely Christ centered and all curricula reflected a Christ-centered, biblical worldview. Both Australia and New Zealand support Christian schools with federal and state funding. “The challenge,” said Westa, “is that due to the fact that they have relatively no issues with funding or financial sustainability, it could allow schools to lose the focus on their mission and vision if the leadership is not vigilant. Aside from the amazing funding, all of these schools share the same concerns we have: governance, integration of faith and worldview, maintaining their mission and vision, and measuring the impact of their education on their graduates.”

Westa visited several schools in Queensland, including Caloundra Christian College (preK-12); Glasshouse Christian College; Hillcrest Christian College; and Mueller College, which has a retirement village as one of eight church-sponsored ministries collocated on the campus. “Christian School Australia (CSA) schools are not parent-run associations, but are instead church-run organizations,” said Westa. “At Mueller College, the school is run by an incredibly talented administrator who has built quite a team of young leaders. Their focus is on the relational side of the gospel, and everything on the campus, from facilities to curriculum, passes through the lens of building relationship with Christ and the rest of the community.”

In Wollongong, Westa spoke at Albion Park Presbyterian church; met with David Gray, director of the National Institute for Christian Education (NICE); visited the CSI member school Tyndale Christian School, and spent time with the principal of Nepean Christian School and the staffs of CEN and NICE, discussing potential areas of collaboration.