Rod Brandsen has been named one of three recipients of the 2017 Fr. John B. Zwers Award by MANS. 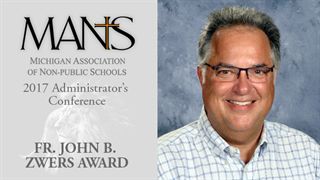 Rod Brandsen, principal at Rose Park Christian Elementary School in Holland, Michigan, has been named one of three recipients of the 2017 Fr. John B. Zwers Award by the Michigan Association of Non-Public Schools (MANS) Board of Trustees.

Fr. John B. Zwers was a founding member of MANS, serving on the board of trustees from 1972 until his death in 2004. The MANS board instituted the award to recognize individuals with a strong history of support for faith based schools.

In addition to Brandsen, three others were presented with the award: Bradley Smith of St. John Lutheran School in Fraser, Michigan; Timothy Nelson, pastor at St. Mary Star of the Sea in Jackson, Michigan; and Dennis Stillwell, pastor at St. Frances Xavier in Petoskey, Michigan.

The awards were presented during the MANS administrators’ conference, held on Mackinac Island, Michigan, October 11–13. MANS represents over 400 faith-based schools across Michigan.