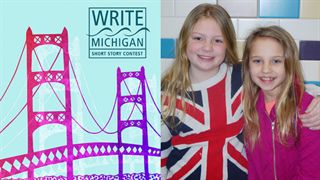 Jovie Cochran (right) and Johanna VanDyke (left), fifth graders in the Spanish Immersion program at Kalamazoo Christian in Kalamazoo, Michigan, participated in the fifth annual Michigan Write: Short Story Contest. Both girls placed in the top five in the Spanish language category, and Johanna was the judges’ choice runner-up.

Students in Maestra Sebastiani’s class had been working on writing tall tales and were encouraged to enter the contest, which was sponsored by the Kent District Library and Schuller Books. Jovie and Johanna took the initiative and submitted their works last fall. All submissions were reviewed by a panel of judges, and ten semi-finalists in each category (teen, youth, adult, and Spanish-language) were posted online to allow public voting. All of the semifinalists will be published in an anthology, with a book release and author signing event scheduled for March 18.

Johanna said her writing was inspired by a book that she had read that was set in Alaska. She also did some research on a historic earthquake that took place during the time period in which her story, “Neva Salva Alaska,” was set in order to provide readers with some historical context.

In her story “Rosana y Arremico,” Jovie took inspiration from the classic fairytale “Goldilocks and the Three Bears.” The main character was modeled after her own experiences and reminds the author of her brother and of herself.

Kalamazoo Christian has offered Spanish immersion education since 2010, with the goal of offering education that embraces cross-cultural competencies, upholds academic achievement, and allows students to obtain a high level of proficiency in both English and Spanish.

“The opportunity to have our students submit work up against other Spanish-speaking students in the area, some of them native speakers, is a testimony to the high level of language proficiency that students have attained,” said Emily VanDis, the school’s Spanish immersion point person. “Both Johanna and Jovie have felt validated and proud of their writing based on the outpouring of responses that they have received from their school community, family, and the local writing community as a whole. This was the first time that our school was aware of the Michigan Write: Short Story Contest, and the first time that either girl had submitted writing to a contest of any kind. To have their efforts recognized was such an honor.”