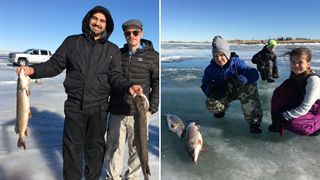 The event evolved from the school’s new-this-year options classes for the 4/5 grade, which included such electives as computers, embroidery, drama, and fishing. “Part of the idea behind the options classes was to help kids re-connect and identify with our school as a place they love to be,” said principal Jay Visser. “It also allowed for a deepening of staff-student relationships as we explore an elective together.”

Each option surrounded a Teaching for Transformation Throughline, and each had a service learning project attached. For the embroidery option, students created something that was donated to the city's soup kitchen, the art option created a work that was donated to a Christian ministry for homeless people, and the students in the drama option wrote and performed a skit done at the school’s Christmas chapel.

“As part of our Christian outreach, we want to give students an opportunity to befriend people who have had some turmoil in their early lives,” said Visser. As a community-building extension activity, students who had taken the fishing option planned the event and invited area students originally from Syria to go ice fishing with them on a local lake.

To connect with refugee families, the school worked with Lethbridge School District No. 51 and Lethbridge Immigrant Services. On the morning of February 14, David Fuller, the school district’s English as a Second Language lead teacher, spoke at Immanuel Christian, providing students with information about the background and experiences of the Syrian students. 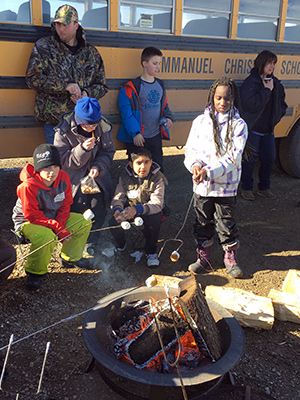 That afternoon, ten Syrian students (and some of their family members) fished alongside 72 Immanuel Christian students plus volunteers, who taught the students the ins and outs of ice fishing. Several groups managed to pull fish from the lake. The trip included hot dog and marshmallow roasting (with kosher marshmallows), hot chocolate, and ball hockey on the lake.

The community-building aspect of the trip was key, according to Visser. “It enabled our students to learn about the different culture of a group of people and also to extend to them hands of friendship. Given that these people are new to Canada and have had a tumultuous last 12–24 months, we wanted to show the Syrian kids some great Canadian pastimes as part of welcoming them. We also wanted our students to connect with a group that has different values and beliefs so that both groups can understand this doesn't mean we can't be friends.”