Five Ontario teachers, all from CSI member schools, are the latest recipients of the awards. 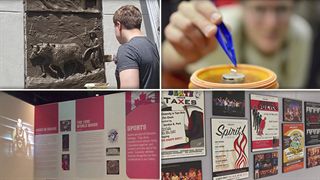 Five Ontario teachers, all from CSI member schools, are the latest recipients of the John Rozema Awards for Teacher Excellence. Now in their second year, the Rozema Awards recognize teachers who surpass expectations in their work at Christian schools.

The awards, presented on June 8, went to five teachers in four categories:

Margaret Kamping, a Grade 3 and 4 teacher at Dunnville Christian School, got her students involved in helping to spur the restoration of Hamilton sculptor Elizabeth Bradford Holbrook's work at a local fountain.

Anneke Gretton, a math teacher at Chatham Christian School, had her Grade 11 students used their mathematical skills to research poverty in their community and to develop realistic financial plans for a young person living on their own.

The students of Kim Furtney and Jeff Weening, who teach history and English respectively at Unity Christian High School in Barrie, developed a Canadian history exhibit at the Simcoe County Museum.

Excellence in the Teaching of Creative and Performing Arts

The Rozema Awards added a new category this year. "This is the first time we've included an award for a teacher involved in the arts," said Michael Van Pelt, president and CEO of Cardus, the Christian think tank that presents the awards. "That's an area where the seeds of culture are planted, the results of which we'll see in the lives of their students."

The John Rozema Teaching Excellence Awards are named for and sponsored by Sarnia business leader John Rozema, known for his commitment to both local and global issues and for his support of institutions such as Sarnia Christian School. The awards are presented in partnership with the Christian School Foundation.