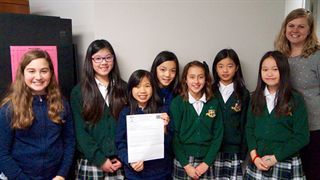 Last May, wildfires raged through and around Fort McMurray, Alberta. The fourth grade students of Wesley Christian Academy in Markham, Ontario, wanted to help those who were affected by the fire, and they felt that supporting fellow students at a Christian school would be the best way for them to do that. With the support of their teacher, Katlyn Talsma, they developed a fundraising plan.

“Every month, on the last Thursday, our school hosts Care and Share, an opportunity for each class to choose a charity or cause that is special to them and either raise money or donate items to support that charity,” said Talsma. “In the past we have collected items for the food bank, bought mattresses for an orphanage in Haiti, and collected hats and mittens for a shelter.” 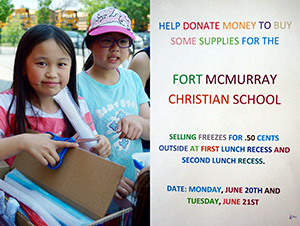 Last spring a few girls approached Talsma with a letter they had written and an idea to raise money. Their plan involved the sale of freezies at recess, with the proceeds earmarked for Fort McMurray Christian School. The girls made posters and gave up recesses during the sale, which was originally planned for two days but was extended to a week due to demand. They also collected donations on Care and Share day and at the school’s year-end BBQ.

“These girls learned that their actions have a huge impact on others,” said Talsma. “When they saw how much it helped the families in Fort McMurray, they couldn’t believe that their idea of selling freezies had done so much! They realized that even though they were just kids, they could make a difference.”