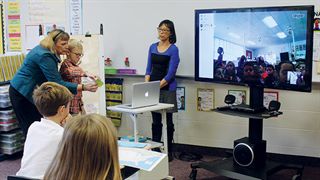 At Ada Christian School in Ada, Michigan, Judy Alphenaar’s third graders used technology to hold a book discussion with third graders from Howard Hathaway Elementary in Portsmouth, Rhode Island. The students met to discuss The BFG by Roald Dahl, which was being read in both classes.

Jackie Frens, Ada Christian’s technology coach, connected the class to third graders in a “mystery” school using Skype. Their time together began with students asking one another questions to help narrow down the city and state in which each of their schools were located. “Students asked questions involving cardinal direction and landforms, such as, ‘Are you east of the Mississippi River?’ ‘Do you border the Atlantic Ocean?’" said Frens. After the students figured out each other’s locations, the topic turned from geography to literature.

Students discussed The BFG (Big Friendly Giant) and shared ideas about characters, plots, and themes. “Together, we were able to dig deeper into characters and predictions about plot,” said Frens. “We made text-to-self connections about the theme of the book, which is compassion for others who may be smaller or weaker.”