70 students participated as part of their biodiversity unit, which focused on tidal pool ecosystems.

On November 30, the third graders at Surrey Christian School in Surrey, British Columbia, traveled to White Rock Beach to participate in a program called the Great Canadian Shoreline Cleanup. The 70 students and more than 15 parent volunteers participated as part of their biodiversity unit, in which the school chose to focus on the tidal pool ecosystem.

These students are no strangers to helping the oceans. Earlier in the school year, the third graders went to a warehouse in Vancouver to help sort garbage collected off the western shore of Vancouver Island, some of which came from the tsunami in Japan five years ago. 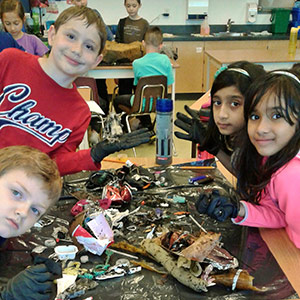 “My favorite part of the work was when we came back to class,” said teacher Madison Steunenberg. “We talked about some of the Throughlines and students had the opportunity to identify one or more of them that they experienced on the trip. Before I even prompted them to make the connection between the Throughlines and the fieldwork, students were saying, ‘Hey, we did that today! We were Earth-keepers.’ That was super cool to see!”

“We are excited to be part of this effort to create positive change for the environment and to become aware of ways we can participate in keeping the shorelines clean,” said teacher Karin Loubser. “This is one way that we are engaging God's world in the servant way of Jesus.”