Five unique, gifted students from different regions across Canada and the United States gathered in Washington, DC at the Museum of the Bible to challenge themselves in the final round of competition.

The Curriculum and Instruction team at CSI was thrilled to host Luke Landis, Caden LeMahieu, Levi Little, Justin McKendrick, and Andrew Peter in Washington, DC on Thursday, June 20. The final round of competition was a celebration of all the hard work each of the students put in over the course of the year during the local and regional competitions. While there was nervous anticipation, fun was had, and new friendships were formed.

The event kicked off Wednesday, June 19 with a chance for the student finalists and their families to meet one another, while enjoying some light refreshments. Thursday morning began bright and early with a time of devotions and prayer, reflecting on the importance of hiding God’s Word in their hearts and meditating on it day and night. After instructions for the long-awaited Bible Quest were given, the students were handed a clipboard with 26, two-part questions they were challenged to answer within a one-hour timeframe. The first part of the questions came directly from the NIV Kids’ Quiz Bible, and the second part of the questions took the answer from the first question and tied it in with an artifact or item on display at the Museum of the Bible. The anticipation was high as students left to begin their quest with their regional judge and parent/legal guardian alongside for moral support and safety.

As students came back from the Bible Quest to have their quizzes officially scored, their reactions were mixed. Some were excited to be done with the Challenge and their nerves. Others were surprised they felt slightly overwhelmed and challenged, but overall the feeling in the room was relief and excitement that they completed such a monumental task in their young lives. Some of the families, who traveled to support the students, asked for the students’ autographs on their programs so they could commemorate the event.

While the CSI staff scored the quizzes, the students and their families enjoyed a delicious lunch at the Manna restaurant at the Museum of the Bible. With bellies full and a sense of camaraderie, the five young gentlemen took their seats to hear the results. Darryl Shelton, CSI chief operating officer, briefly said a few words thanking the families and other attendees for their faithful support of Christian education. He also pointed out what an achievement it was that each student had made it to this point and even though a winner would be chosen, it was a feat to be celebrated that they made it to the Museum of the Bible in Washington, DC! Rachael Heyboer, director of product development, revealed the results, which were received with thunderous applause and cheering. Each student was celebrated for their hard work and the importance they placed on memorizing and learning the Holy Scriptures.

Results of the North American Competition

Our finalists placed in the following order:

When asked why he thought it was important to celebrate his son’s learning of the Word, Brett Landis said, “It gives us an opportunity to understand what’s most important—which is God’s Word—and to think about how we learn it and the way that we can weave that knowledge into the rest of our lives as a family.”

The staff at CSI is grateful for all the work our CSI Bible Quiz Challenge Coordinator, Elizabeth Vander Zwaag, and the five regional judges did to pull off such an amazing event for our member schools that participated. It truly was a celebration of the freedom we have to read, study, and know the Word of God. We hope these experiences stay with all the participants for years to come. CSI would like to thank our sponsors, donors, and the Christian Schools International Foundation for providing the funding necessary to make this event possible. 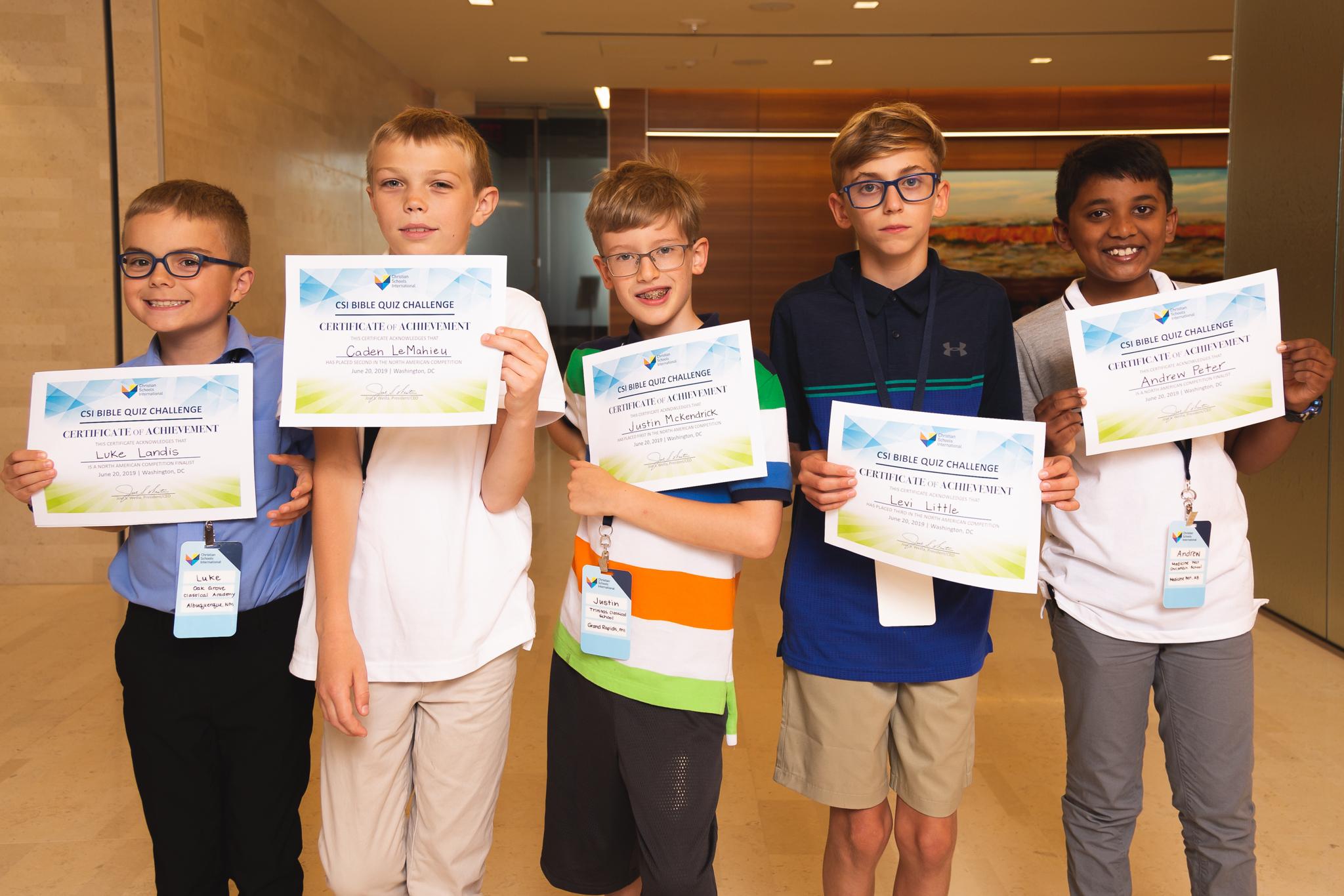 During the Bible Quest, Luke, Caden, Justin, Levi, and Andrew (pictured left to right) raced throughout the museum to answer as many questions as they could in one hour. 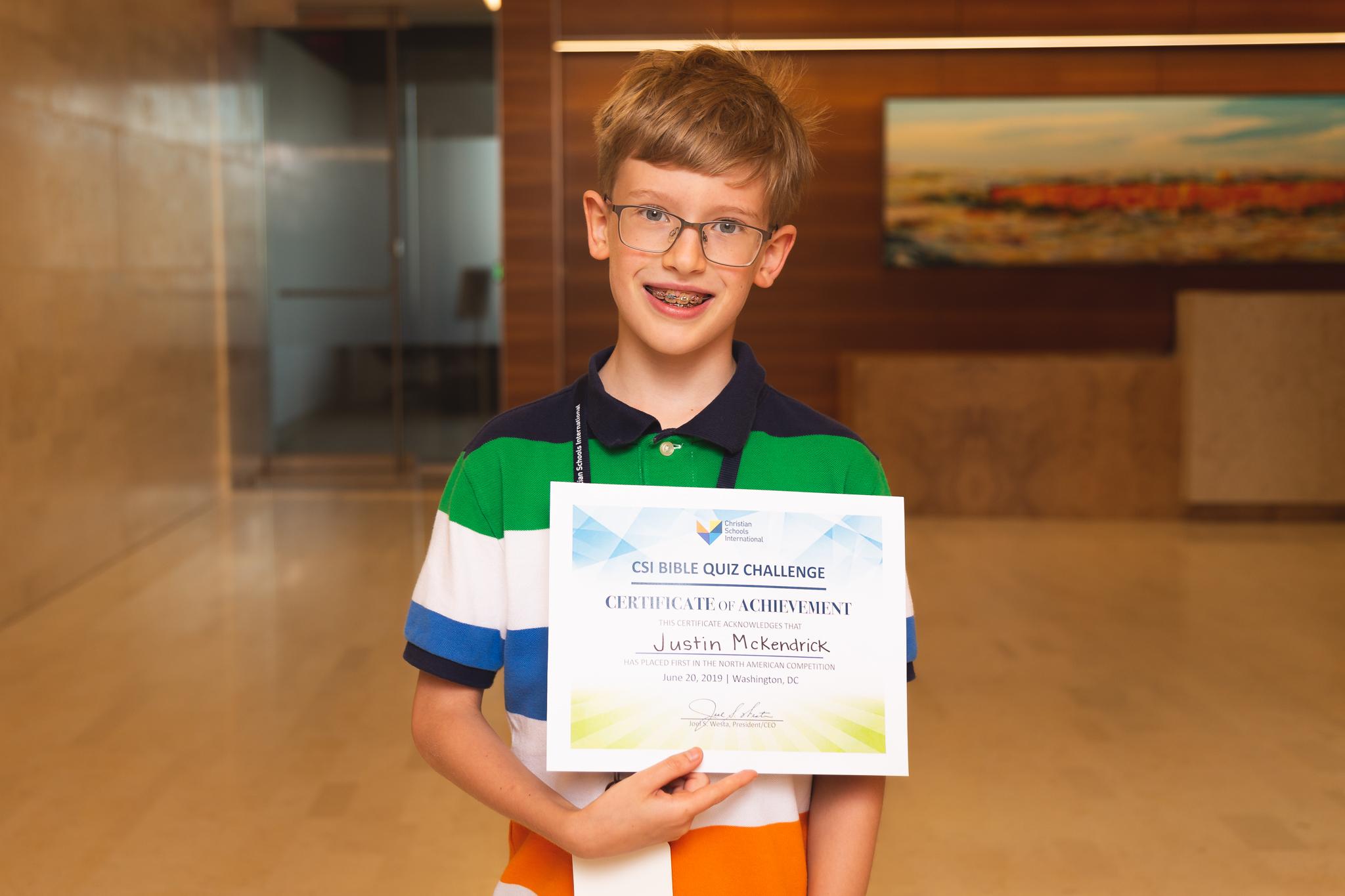 Justin McKendrick, who placed first, said one of the reasons he was excited to be at the North American competition was “to be a celebrity.” 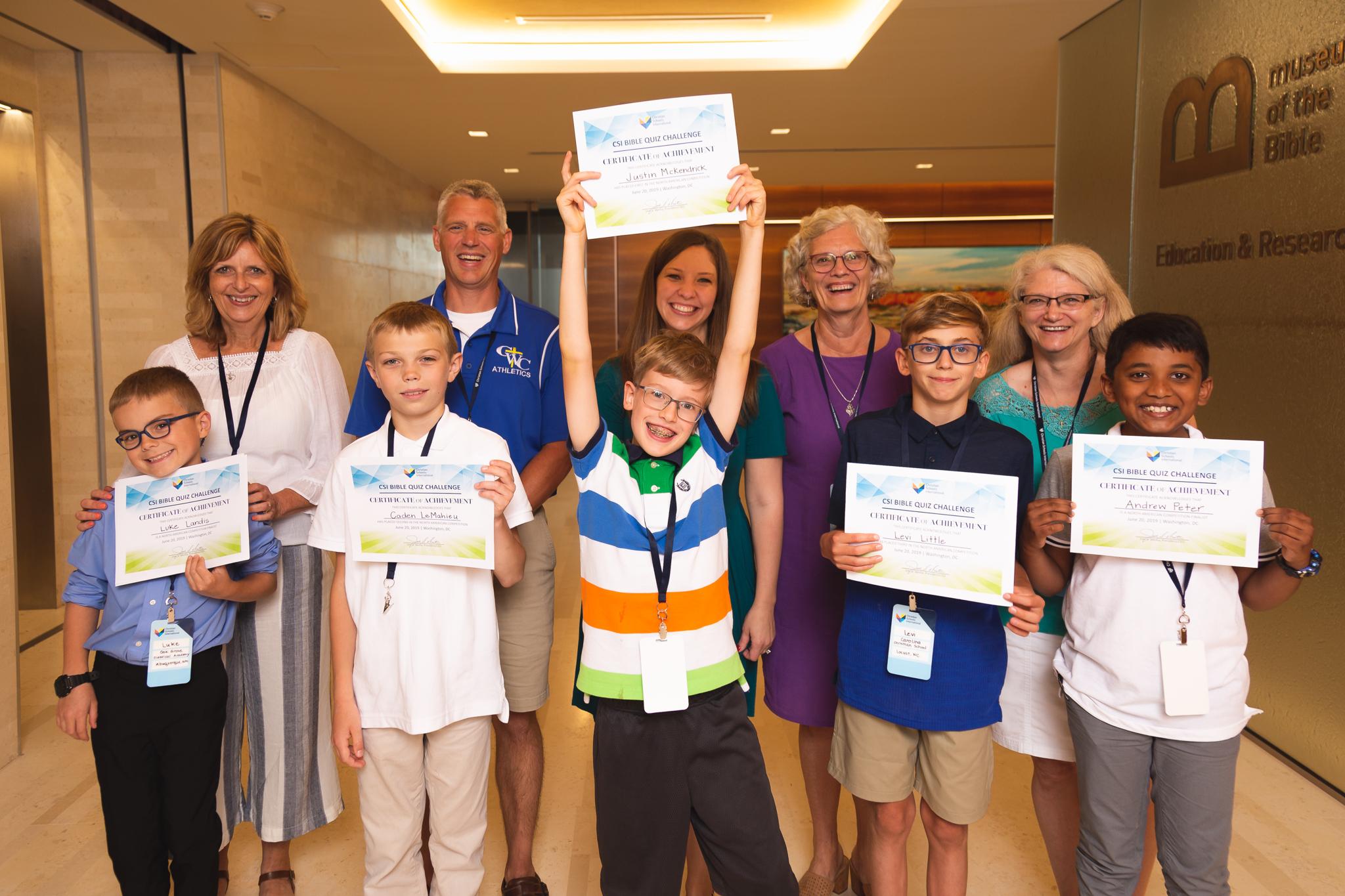