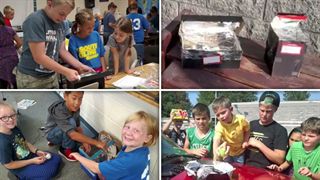 In early October, students at South Olive Christian School in Holland, Michigan, took advantage of unseasonably warm temperatures to build solar ovens. Through the school’s Makers Space program, student teams researched, created, and tested their solar ovens on a 90-degree day. Paula DeRoos, the school’s principal as well as a teacher, put the project together, which was inspired by the autumnal heat wave. “With so many people complaining about the heat, we decided that this was the day the Lord had made and we needed to find a reason to rejoice and be glad in it,” she said. 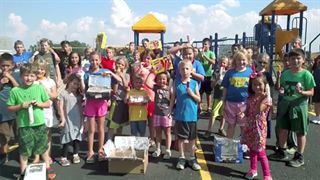 All the teams used similar designs for their ovens, but discovered that if the oven was sealed too tightly, moisture negatively impacted their baking. Ovens that used magnifying glasses or mirrors and that were in direct sunlight out of the wind functioned best, and they were able to bake the egg until it was hard boiled. Students also discovered that the expression about “frying an egg on the sidewalk” wouldn’t really happen on a 95 degree day.

“Our school is STEM- [science, technology, engineering, and math] based, and students learn hands on,” said DeRoos. “The solar ovens tie into an alternative energy unit; as part of the unit we also visit a solar field, build solar water heaters, and create solar robots.”

Last year, South Olive Christian was awarded a Monsanto Science Grant of $2,500. Said DeRoos, “In partnership with Zeeland [Michigan] Farm Services, our middle school did a study on Monsanto’s 100-day corn, and what the last possible day of planting could be in a season to still get a profitable yield. Students studied the field surrounding the school in comparison to two corn plots they planted of 100-day corn. Students then tested moisture, disease, and yield in comparison. The grant money is being used for science-oriented purchases. We started a Lego League, purchased 10 robots for our robotics unit, and have $1,500 to spend on science materials throughout the next two years.”