Students researched and reported on other things that were launched in 1967. 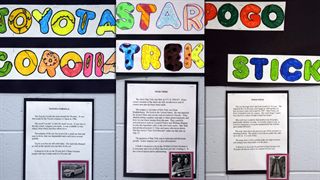 As a part of the 50th anniversary celebrations at Laurentian Hills Christian School in Kitchener, Ontario, students researched and reported on other things that were launched in 1967. Third and fourth grade students were selected by their teachers to participate in the project, which was coordinated by Tini Oosterhof, the school’s resource teacher and enrichment coordinator.

Oosterhof provided students with a list of items from which to choose, and students opted to report on Fresca, the Pogo Stick, the Beatles, Twister, the Batman television series, Doritos, Rock’Em Sock’Em Robots, Toyota Corolla, the Star Trek television series, and Astro Turf. 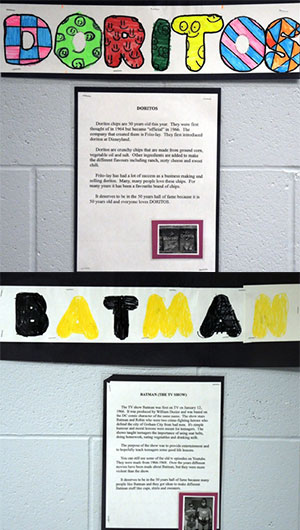 Students were pulled from regular classes to complete the work during the school day. They were provided with information and an outline with questions to guide their research. Students read and summarized information and wrote up one-page reports, offering support for why the item deserved to be in the school’s 50 Year Hall of Fame. The final reports, mounted and illustrated, were displayed in the school’s hallways.

“The students really enjoyed learning about the items and were surprised that some of them we still use today,” said Oosterhof. “They enjoyed listening to each other's final reports and then seeing their work displayed in the hall. The biggest learning was in reading the information and trying to put it into their own words and finding enough information to cover the questions on the guide sheet.”

Other anniversary events included a balloon drop on the first day of school, a school-wide rooftop picture with students in the formation of a 50, and the planting of over 400 tulip and daffodil bulbs in the yard to enjoy in the spring. The anniversary year will conclude at the end of May with a fun fair/BBQ and an open house/formal dinner for alumni.