Teachers learned the Community of Practice (CoP) model and to integrate Christian worldview. 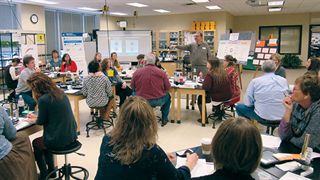 On November 16 and 17, Christian school teachers of science from across North America met at the Van Andel Education Institute (VAEI) in Grand Rapids, Michigan, for the second Christian School Educators Science Academy (CSESA). The teachers learned about the Community of Practice (CoP) model, developed by VAEI, and ways to seamlessly incorporate Christian worldview into the teaching of science. 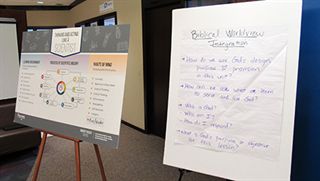 The academy models hands-on processes that teachers can use in their classrooms. Working in teams, participants are walked step-by-step through a variety of experiments so they can learn the model and understand the scientific method. The teaching technique gave at least one elementary teacher confidence: “You can use the CoP model in your classroom, even if you’re not a scientist.” Said another participant, “I’m already planning to do this experiment with my students.”

A second-year academy participant praised the “amazing, high-quality science” that she was introduced to last year and that she, in turn, was able to introduce in her classroom. She attended this year’s academy to both reinforce what she’d learned previously and to discover new ideas to bring her teaching. 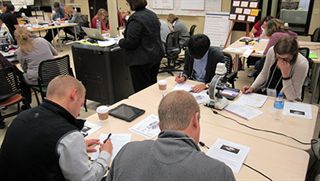 Another benefit of CSESA is that teachers learn from and work with each other while at the academy and create ongoing networks after the event. Conversation and group work are encouraged: “There is a tremendous amount of communication in science,” said Ken Bergwerff, assistant professor of earth science education at Calvin College in Grand Rapids, Michigan, who assists with instruction at the academy. “Scientists aren’t just all off working independently; scientists are always connecting with other scientists. We take what we observe and attach it to prior knowledge.”