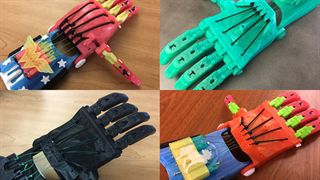 Students at Crown Point Christian in St. John, Indiana, are impacting lives using a 3D printer. Through the organization e-Nable and the help of computer and tech teacher Luke Mazur, the students are creating prosthetic hands for children worldwide.

Mazur secured a printer through a Beta testing program and soon after connected with e-Nable, a network of volunteers that builds prosthetics. The organization provides files and other resources in order to build a prototype; after the prototype is approved, volunteers build hands for specific people.

Some Crown Point students’ palm prints have been used as models. “All of the recipients of our hands so far have been children,” said Mazur. “Three children in Syria—ages ten, twelve, and fourteen—a seven-year-old girl in South Carolina, and a high school student.”

Printing a hand takes a week, on and off, to complete. “So far it has been a group effort, although I do most of the work and share the process with the students as I go,” said Mazur. “We loaded all of the files together and each grade saw a different piece of the hand being designed and created, and then they got to see how it all comes together. Next year the builds will be part of class time and will be incorporated into the new STEM class we have planned.”

To date, the students haven’t gotten any feedback from recipients, “which makes it hard, but the giving is really what it’s all about,” said Mazur. “I think the students are seeing that a 3D printer is not just used for making toys and figures, but can be used to change lives and impact the lives of others. It really shifted the conversation as the lesson progressed, and illustrated the Bible verse that was the focus of the lesson, 1 John 3: 17: ‘If anyone has material possessions and sees a brother or sister in need but has no pity on them, how can the love of God be in that person?’”