Randy Kroll was presented with the Leadership Award by the Minnesota Independent School Forum. 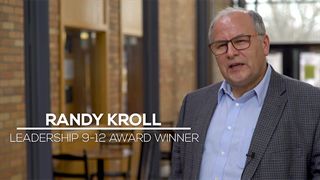 On April 30, Randy Kroll, president of Calvin Christian School in Minneapolis, Minnesota, was presented with the Leadership Award (9–12) by the Minnesota Independent School Forum (MISF). The award “recognizes the hard work and dedication of school heads, presidents, principals, superintendents, or executive directors who instill passion in people they work with, bring innovative ideas forward, and advocate for the importance of private and independent education in Minnesota.”

Kroll was nominated by Carol Veldman-Rudie, on behalf of the Calvin Christian Board of Directors. The nomination said, in part, “Randy used his considerable skill and networking abilities to create a new organizational environment, realign positions to reflect the talents of those who held them, and bring the school into fuller participation with the greater community. Because of Randy’s efforts a new culture and enthusiasm is palpable in our community. With his encouragement and support a new curriculum—one that reflects the schools’ unique mission—is being joyfully received and strategically implemented…he also created a web of new networks.”

Kroll was affirmed unanimously by the MISF selection committee “due to the transformational impact he had on Calvin Christian,” said Tim Benz, MISF’s president. “It was very apparent that Randy took a school that was in a tenuous situation and brought stability and vision and created a well-connected community. Since Randy came from a non-traditional background to his new role, he brought a new voice and perspective. Randy has also been a board member of our organization for seven years and brings a respected voice to our board governance and discussion.”