Calvin Christian 8th Graders Get a Taste of Immersion Experience

Students practiced their Spanish through a field trip in early April. 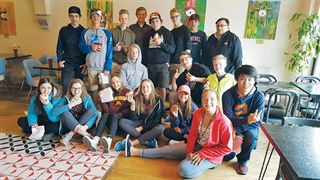 Seventeen 8th-grade students from Calvin Christian School in Edina, Minnesota, practiced their Spanish and learned about other cultures through a field trip in early April. Students traveled to Mercado Central market and ordered lunch in Spanish, and then did a scavenger hunt in the market. They also explored the cultural diversity of Minneapolis through a City Vision tour and were able to drink tea at a Somali market, try "hipster" donuts at Glamdoll Donuts, and walk through an Asian grocery store.

This is the fourth year that Spanish teacher Mandi Meyer has done this field trip, a tradition established by the previous Spanish teacher. “Students had been working on a food unit in Spanish class and had practiced how to order a meal in Spanish,” said Meyer. “Many were nervous about having to speak in Spanish with native speakers, but they were surprised afterwards about how much easier it was to be immersed in the language than they had anticipated. Students also remarked on how kind and patient those working in the Hispanic market were with them as they practiced their spoken Spanish.”

Students enjoyed getting to experience a different culture and trying a variety of food, including many dishes that they had never heard of before. They were also impressed at the variety of cultures within Minneapolis, as many of them had never been in the areas of the city that are predominantly Somali, Hispanic, and Asian. “They learned a lot on the tour of the city about the ebb and flow of various groups of people in and out of Minneapolis over the last few decades,” said Meyer.

“We talked as a class beforehand about how we can be a light for God in the community during the field trip, and during the tour of the city, students were taught about ‘stomach evangelism’—building trust and relationships with others over food in the hope of eventually sharing the gospel with them,” said Meyer. Students’ written reflections mentioned this, as well as other ways they saw God working during the field trip.